As the food critic Florence Fabricant once said, “Hominy still has its place in American cuisine.” However, to understand what that place is, you have to begin with what it is, where hominy has been, and what we can do with it.

Hominy is a dish of boiled maize kernels that, throughout most of the past, were also nixtamalized (NEESH-ta-mal-aiz-d), or prepared using an alkaline substance. This may not be the hominy you know. Like many foods, hominy has gone through many historical iterations–it has great antiquity (think 3000-2000 B.C.) in Mesoamerica as one of the first steps in making masa (corn dough) or the final product in pozole (whole kernel maize soup). Several centuries later, hominy was disseminated into the American Southwest, again as important to both masa and pozole. By A.D. 1000, an ancestral hominy foodway was being disseminated and practiced throughout many parts of the Eastern Woodlands (which includes the Southern, Northeastern, and parts of the Midwestern United States). Hominy was the primary foodstuff of Indian groups living throughout the region, and is still practiced today by many American communities.

Yet, hominy is also something different. Early European colonists and explorers had mixed feelings about hominy–while they seemed enamored with maize and tortillas, they were ambivalent toward hominy, or in particular, toward its “peculiar” taste. In the North American Eastern Woodlands, Indian groups used hardwood ash, or hardwood ash lye, to nixtamalize maize, which gave hominy a particular taste. (You may know that taste–tortilla chips with “traces of lime” have that taste, as well as Juanita’s Mexican style hominy.) Some even added hardwood ash or lye to the final product, further accentuating “that taste.”

For complicated reasons, though taste is certainly included, most Europeans and Euro-Americans adopted maize but not nixtamalization (NEESH-ta-mal-i-zai-shun). This turned out to be for the worse for many. Not only does nixtamalization alter the taste of maize, but it also chemically changes the kernels, making several otherwise unattainable essential amino acids and B vitamins digestible for nonruminants, (i.e., humans and other non-grass eating animals). Thus, nixtamalization makes maize a food you can safely obtain 40% or more of your daily calories from and still live a happy, healthy life. Non-nixtamalized maize is not nutritionally complete, and a person receiving more than 40% of her calories from “raw” maize (that isn’t also accompanied by a complementary protein like beans) would suffer from chronic malnutrition. “Corn sickness” was a serious epidemic in many parts of the Old World after maize was adopted and incorporated into peasant diets, and was even an issue in the American South during the Great Depression when Euro-Americans and Americans alike, whose culinary knowledge of maize derived from the Old World, turned to maize as a dietary staple. 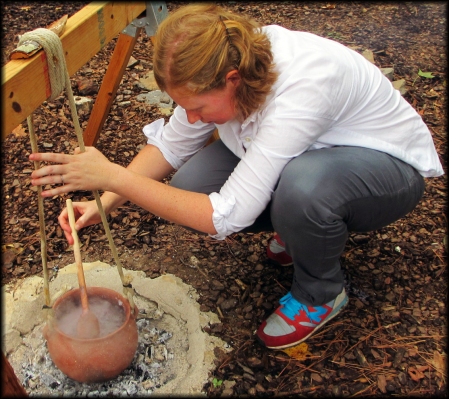 I know all of this because hominy, and in particular the hominy foodway of the Eastern Woodlands, is my career. My name is Dr. Rachel Briggs and I received my PhD in archaeology in the department of Anthropology at the University of Alabama. I am a foodways archaeologist, and my dissertation focused on the early social and culinary history of the prehistoric Mississippian civic-ceremonial center of Moundville, located in west-central Alabama. I study ceramics, cooking techniques, hominy and maize, and cultural perceptions of food. I have spent many years researching all things hominy, and perhaps the most important thing I have learned is that many people not only have no idea what hominy is, but even less know about its significant history. As a native South Carolinian with Carolinian parents, I grew up with corn–from corn on the cob to grits, to numerous summer days spent shucking, shelling, stewing, and freezing corn for the winter, yet I had no idea what hominy was until I began asking what exactly people at Moundville were eating.

My research has led me to a number of interesting places: biographies and early colonial accounts, modern recipes, trendy restaurants, countless books on corn, and even my own experiments with recreating lost and as well as creating new hominy recipes. My hope is to help reignite both a culinary and historical interest in this important foodway. Hopefully, the information here will inspire you to try it for yourself, to maybe even make your own woodash lye (and perhaps weigh in on which trees have the best flavor) or grow your own heirloom flint maizes (there are so many with so many different subtle flavor and texture differences). Or, if you’re already familiar with hominy, to find new ways to incorporate this food into your own traditions.

Whatever you choose to do, I hope you find something worthwhile here. Food and foodways are important aspects of all our lives, and in no way should this blog be considered an exhaustive anthology on the subject–foodways are dynamic and ever-changing, and the hominy foodway is no exception. So, if you find a gap in the knowledge somewhere, or you just have your own favorite recipe you’d like to share, please let me know!

And, I hope you enjoy!